Elsie Mastick, Reflections on my Mother, by her loving son, Bruce Mastick 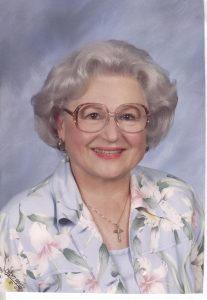 Elsie Marie Mastick, my mother, was born May 2, 1927 in San Rafael, California. She is the only child of Swiss-Italian parents Augusto and Giovanina Foglia, who immigrated to America in the early 1900’s. As a child growing up among many other Italian-American families, the European heritage was ever present. Her first language is Italian and she still speaks it today when she talks with relatives in Italy. A story that is fondly remembered has her arriving to kindergarten on her first day of school with a rope of garlic around her neck (to ward off evil spirits). When she returned home that day a discussion took place, which I believe she was the most vocal, and it was decided that this was one tradition that needed to change. Even at this early age her sense of what is appropriate, and, also her strong will were developing.

Her father “Gus” came to America at 16 years old and began working in the ranches south of Salinas. He learned many talents during his young adult life, but the one that seemed to form his future was the art of making Italian meats. After years of selling his goods around the state, he turned his abilities into being an innovative grocer. He and his partners opened a large grocery store in San Rafael. This is very notable for young Elsie because she was able to assist in the business during her teenage years. Having been received well into the business, she eventually became the first female butcher in the local union. Fellow historian Nilda Rego so eloquently captured this time in her life with her wonderful article in the Contra Costa Times.

During the years of growing up in San Rafael Elsie built many friendships that still continue today, a true testament of someone who loves people. Also during these years she had her sights set on a young man in the neighborhood, Dewey Mastick. At the age of fourteen, their friendship bloomed and destiny seemed in hand. This may be attributed to her strong will and clear sense of direction for her future dreams. Dewey and Elsie were now a couple and they enjoyed many high school adventures with all their friends. When Dewey went off to college at Stanford, Elsie continued to help in the family business and attended business classes at the local junior college. After Dewey graduated, marriage was Elsie’s next agenda item and on September 28, 1948 they were married.

Elsie’s first son, Steve, was born on October 18, 1951 and I was born May 10, 1954. During this time we lived in a small house two doors down from where Elsie had lived all her life. Maybe the closeness to his in-laws or the fact that Dewey was working in the banking industry in San Francisco allowed them to explore the idea of a new location. The new location turned out to be Moraga. In 1959 her mother cried and we moved to our new home on Scofield Drive in Rheem Valley. This was the beginning of what is now a 50 year love affair between Elsie and her community. The new neighborhood was full of kids, just perfect for an eight and five year old. Strong memories of all the children in the neighborhood was that Elsie’s house was where you could go if you needed a snack. A constant supply of kid-friendly treats was always available. This being a strong genetic trait of Italian hospitality blended with grocery store training.

As we settled into the Moraga lifestyle, Elsie felt that helping the community was the next step in her life. After many years of volunteering with the school’s library system, she earned her way into being the first librarian on staff for the Moraga School District. During the mid 1960’s much expansion was taking place within the growing school population, and with the help of many, libraries were being established in the new schools. Her career with the school district lasted well over 20 years and even after retirement she would still go back and volunteer. These years also gave her many new lifelong friends from teachers, administrators, parents to even many of the students. Her persistence and energy in helping set up the library system will be felt for years to come.

All through the years in which Elsie was working in the Moraga library system and raising her family, her appreciation of community continued to grow. Event after event she found herself helping and contributing to make each get-together the best it could be, always with a smile and a sense of optimism combined with good organizing skills.

Among areas where Elsie is very active is the Moraga Valley Presbyterian Church. She has been a parishioner almost all the time she has lived in Moraga. Dewey served on many of the church’s boards and committees and would always seek counsel from Elsie, and true to form, yet more wonderful friendships were developed.

The Moraga Historical Society is another arena in which Dewey and Elsie participated. Dewey served as president for three years but again always consulted with his wife because of her vast knowledge of the area and most of its occupants. Even today she can be found every Wednesday at the History Center and generally is very excited when she exclaims in a phone conversation that she will be at work all day if I need to get a hold of her on Wednesday.

In the late 1980’s and 1990’s Dewey and Elsie traveled more than they had in their earlier life. They visited relatives in Italy several times and she even was able to take her father to his homeland to see a half-brother he had not seen in over 75 years. I believe their travels might have been limited earlier, for as with people, Elsie loved her pets. Her love of animals was widespread and as with all the kids on the street, the animals were treated with all the kindness one can imagine. Elsie would be prone to worry too much to enjoy her vacation.

Elsie, or as she is known to her grandchildren as “Nonni”, is a proud grandmother of five, in order of age Nina 26, Nichole 24 (step-grand daughter), Carey 24, Amy 24 and Sara 19. Five granddaughters at Christmastime in matching outfits from Nonni is quite something to see!

Her caregiving to her friends is well known throughout town and she received this in return in 1999 when Dewey passed away. Her support group helping her through this was enormous and was appreciated greatly. Dewey was the love of her life and she has always felt so fortunate to have been able to celebrate their 50th wedding anniversary in Yosemite with all her family.

Elsie is still living in Moraga in a smaller home next to the shopping center and continues her enjoyment of the Moraga lifestyle and has spent some time in recent years traveling within the United States. She has been lucky to hook up with a wonderful traveling companion and longtime friend, Ed Waltenspiel, another Moraga veteran of many years. Ed has shown Elsie places from his childhood and special areas that she has said she would have never seen if it were not for his wanderlust and fun-loving spirit.

Throughout her 50 years in Moraga Elsie has established herself as a friend to so many. She has always put others first and is always happiest if everything is organized and is in order, just perfect for a volunteer, a librarian and a willing helper. It occurs to me that my mother is a wonderful example of what magic can happen when the community benefits from an individual. Elsie Mastick has contributed so much, but in return she has benefitted so greatly from being in a community like Moraga.