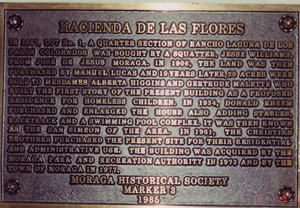 Before Joaquin Moraga’s title to the Rancho Laguna de los Palos Colorados property had been validated, Jesse Hall Williams was a squatter on a quarter section of land on which the Hacienda is now located. Jesse Williams, his wife Mary Ann Netherton and their five children came to California from Platte County, Missouri in the spring of 1854. The Williamses had five more children after they took up residence on the Rancho property. The County forced Jesse to purchase the 160 acres, “Lot #1” from Jose de Jesus Moraga for $800 in 1857. Williams was the only farmer on the entire Rancho property who never relinquished his property to Horace Carpentier. Albert Daniel Williams inherited the property from his parents, both of whom are buried in the Lafayette cemetery. Albert sold the 160 acre estate through Antonio Garcia Regello to Manuel Lucas, Regello’s brother-in-law, in 1906.

Manuel Lucas sold 20 acres to Albert Higgins. One of Higgins’ two daughters, Alberta Hortense, inherited the property at his death, and she and her friend, Gertrude E. Mallette, planned to provide a home for orphaned boys. Alberta was a nurse at Stanford University Hospital, and Gertrude was an author of children’s books and a writer for the Oakland Tribune newspaper. Gertrude was largely responsible for the design of the original Hacienda, hiring the San Francisco firm of Bakewell and Veihe to design the Spanish ranch style single story house, built in 1916,—three bedrooms, oak floors, and tile roof with the main entrance off Moraga Road. What is now known as the “Mosaic Room” was the original entrance. The boys’ orphanage did not survive when state inspectors determined there was no male nurse on the premises. The two women then turned to raising prize cattle, sheep, Irish setters and various crops. In the crash of 1929, the women were forced to sell their twenty acres. Alice and Donald Rheem, son of William S. Rheem, president of Standard Oil Company of California, purchased the property.

Eventually, Alice and Donald Rheem purchased 1,650 acres of Rancho property which Mr. Rheem began to develop in 1937. He first built the Orinda Theater, a bank building and several stores at the Orinda Crossroads. In 1944 he purchased more land from the Moraga Company and the Carroll family. His first subdivision was in 1948 when he built Rheem Highlands, and in 1954 he built the first major commercial center, originally called Moraga Center, to be established in the Town of Moraga. Rheem’s involvement on the Rancho property spelled the end of the pattern of monolithic ownership that had been the situation since the days of Moraga and Bernal.

At the Hacienda, the Rheems did extensive remodeling, creating a lavish, ornate estate. Ironwork, arched windows, staircases, and silver and gold leaf were used in the remodeling. A second floor was added on the two wings of the house, and a north wing to the rear, a stable, horse race track, five-car garage, servant’s quarters, Classical pool complex and guest bedrooms were added. Over the years Rheem spent over $750,000 on the showplace. It was called the “San Simeon of the East Bay”. The master suite, situated a half flight up a round staircase from the second floor, included a bar with tufted leather walls and mahogany cabinets. The estate occupied a total of 32 acres. Timbers from the original house are still in today’s Fireside Room.

A 1937 photo of the Hacienda shows a thoroughbred exercise area and horse race track. Trees from the 1939-40 Golden Gate International Exposition in San Francisco were used in some of the landscaping. A track and stables, a three room chauffeur’s residence, maid and butler’s quarters, a theater, dark room and caretaker’s quarters were added in 1943. Mr. Rheem had the creek dammed to get sufficient water to fill the pool and to supply water to the house and lavish gardens. He also stored water in 55 gallon tanks from the many springs behind the estate (now known as the Mulholland Open Space Preserve). The dam was torn down when the County insisted that the creek should flow its natural course.

In 1938 a pool and cabana were built at the Hacienda, designed by Clarence Tantau, who designed the California Building for the World’s Fair on Treasure Island. Now called the Pavilion, this structure included five dressing rooms, two bedrooms, two baths, a bar, a salon, a reception room and an upstairs projection room. A fireplace dominated the reception room, and the projection room had a ceiling covered with silver leaf. Movies were projected through disguised holes in the upper west wall and beamed to a screen above the double doors leading to the bar. This area once housed a 27’ by 78’ Grecian pool. The Rheems gave lavish parties at this site. The pool was used by pre-flight cadets who trained at St. Mary’s College during World War II. The Pavilion was dedicated to the Town of Moraga on January 6, 1979.

The order was criticized for the luxury of their headquarters, and Brother Bertram Coleman, Provincial at the time, decided it was not in keeping for the Brothers, who professed a vow of poverty, to maintain such lavish quarters. The estate was sold to the Moraga Parks and Recreation Authority for $343,750 in 1973. On the recommendation of a Parks and Recreation Study Committee formed by the Town in 1976, the Town Council dissolved the authority and replaced it with a Parks and Recreation Commission. A contest was conducted to choose a name for the facility; Jeanne Kirsch won with the name “Hacienda de las Flores”. By August 3, 1980, the main house was completely refurbished. In September of 1986, Mayor Margaret DePriester presided at the symbolic “mortgage burning” ceremony. Today the Hacienda serves as an East Bay premier wedding/event venue and Moraga’s community center.